Along with the customer satisfaction survey results, we have another indicator of service quality for fee-for-service plans. We checked disputed claims on file at OPM. A disputed claim is a case in which a plan member has been denied benefits and has followed the required procedure to appeal the denial to OPM. Our ratings show disputed claims per 10,000 Federal enrollees for the period from October 2021 through September 2022. We also report how many cases per 10,000 enrollees a plans initial decision in a disputed claim was changed or reversed.

There are several possible explanations for differences in incidence of disputed claims. For example, some plans may have an unusually large share of hypercritical members, be more aggressive than others in enforcing their policy limitations to prevent benefit abuses, or have benefit limits that enrollees tend not to notice or not to understand. Most of the disputed claims are resolved in favor of the plans on the grounds that they involve matters that are not within the plans’ coverage. But do you want to be in a plan where you will feel the need to file a disputed claim? Everything else equal, it seems preferable to join a plan where the coverage limits are easily understood, communication is good, benefit limitations are interpreted broadly—and disputed claims are rare. 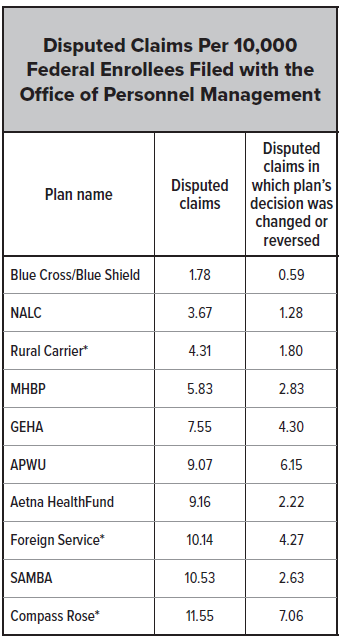