The General Schedule (GS) employee and retiree share of the annual premium varies widely among plans. In national plans it ranges from about $1,200 to almost $4,000 for individuals, and from about $3,000 to over $10,000 for self plus one or larger families. What explains these vast premium differences?

First, plans vary in the kinds of enrollees they attract. Some plans attract families who expect higher expenses. Some have a disproportionate share of high-cost retirees who joined when premiums were lower and do not realize that their plan is no longer a good buy. Unfortunately, Federal agencies all too often neglect to encourage sensible Open Season choices, and employees and retirees are all too often dilatory about looking for savings. Despite repeated urging over the years, Congress has failed to address this problem, which could easily be accomplished by a technique called risk adjustment and long used by Medicare. Plans that face higher costs have to cover those costs through higher premiums. Premiums in such plans far exceed the fair value of their benefits.

Second, plans differ in the generosity of benefits they offer. Variations include coverage of different expenses; coinsurance, the percentage of each expense you pay; and deductibles, the amount you have to pay before the plan will reimburse any expenses for a service. Plans with higher cost sharing can charge lower premiums. This is one reason the new Consumer-driven plans have such low premiums.

Third, plans vary in how well they manage costs. A well-run HMO can reduce hospital costs by 25 percent or more compared to traditional insurance through case management. Fee-for-service plans review utilization and use panels of preferred providers. "Disease management" techniques are powerful tools to contain costs.

Fourth, cost sharing creates incentives for doctors and patients to be less wasteful. High deductibles discourage unnecessary visits, while 100 percent reimbursement of some services might encourage overuse of these "free" services. High Deductible and Consumer-Driven plans' premiums benefit somewhat from slightly younger and healthier enrollees, but mainly from their incentives to reduce unnecessary care. Also, the time and trouble to file claims for expenses slightly above the deductible discourages some enrollees from applying for them.

Fifth, variations in the proportion of enrollees with Medicare Parts A and B has a big effect on plan premiums, since Medicare is "primary" (pays first) for retirees, and covers over four-fifths of hospital and doctor costs. Most HMO benefits are so good that retired enrollees often do not sign up for Part B, which puts these plans at a major disadvantage in keeping premiums low.

Sixth, the formula for sharing premium costs magnifies the differences in what you pay. For GS employees and annuitants, the government pays 75 percent of the overall cost of each plan, up to a maximum amount. This varies each year according to a complex formula. The maximum contribution in 2023 for GS employees and annuitants is about $6,400 for singles, $13,600 for self plus one, and $15,900 for families. There are separate formulas for most postal employees, and for employees of the SEC, FDIC, and several other agencies, with higher government shares. A few types of enrollees, such as former employees, get no government contribution and must pay the full premium. 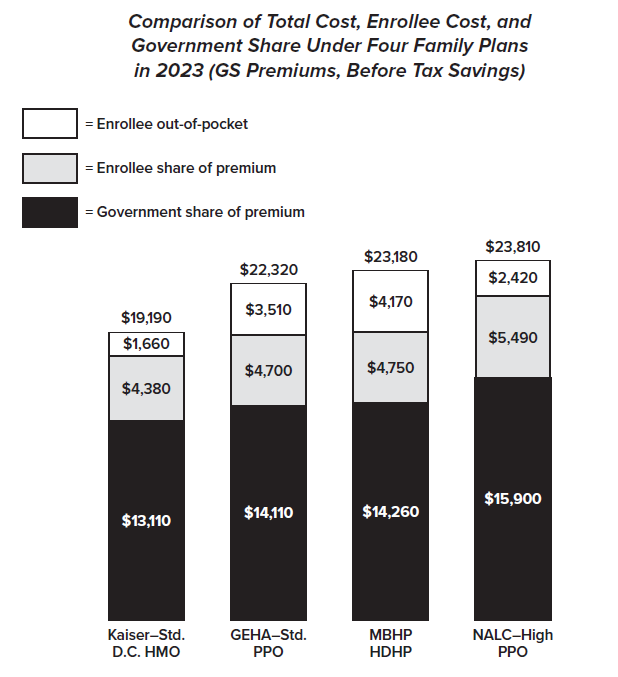 In summary, you pay modestly for insurance from a well-run plan, but you pay more for a plan's inefficiencies, its unusually generous benefits, or its disproportionate share of high-cost enrollees. Your ability to switch among plans during Open Season gives you a major tool for obtaining the best deal.

The above chart "Comparison of Total Cost, Enrollee Cost, and Government Share" shows how the employee's premium, the total premium (employee and government share), and the employee's out-of-pocket costs compare for a family of four under several plans. All these factors contribute to premium differences, and explain why some plans are such bargains. Of course, some of the differences are offset by what you may have to spend out-of-pocket if you pick a plan with less comprehensive benefits. That is why our plan comparisons include both the cost of insurance and the cost of medical bills that are not covered. It would be foolish to select a plan just because it has the lowest premium. It would be equally foolish to pick a plan just because it seems to have the best benefits if you wind up paying more in premiums than those extra benefits are worth to you.