The average 2023 premium will increase 8.7% for enrollees. This is considerably higher than in recent years, but is consistent with most private employer cost increases and largely reflects economy-wide inflation and, to a lesser extent, Covid-19 costs. Many plan premiums rose less than average, and some decreased. Of the 262 FEHB plans available in 2022 and 2023, premiums decreased in 56 plans, stayed the same in 9 plans, increased less than the 8.7% average in 119 plans, and increased 8.7% or more in 78 plans. 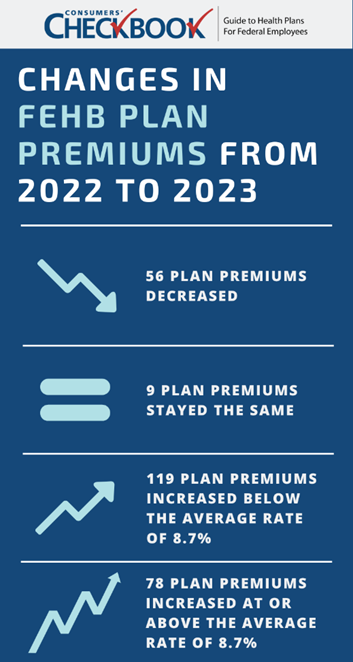 No enrollee, of course need pay the average premium increase as the the great majority of enrollees have two dozen or more plan options and can choose one to reduce their premium below what they currently pay.
Surprise billing can happen to the unwary consumer who uses a provider that isn't in the preferred provider network of the consumer's health plan. The "No Surprises Act" of 2020 bans almost all surprise billing and took effect for almost all insurance, including all FEHB plans in 2022.
Congress recently enacted the Postal Reform Act of 2022, a law aimed primarily at reducing health insurance costs by transitioning to a system under which almost all postal annuitants will be automatically enrolled into Medicare. This will make Medicare the primary payer for these annuitants. A new postal cost pool will be created and thereby use these savings to reduce FEHB premium costs for all postal employees and annuitants. These changes will be implemented in 2025 and are expected to have relatively minor effects on non-postal employees and annuitants, since their costs will fall primarily on Medicare.
Another 2022 law has extended to Native American tribally-controlled school employees. Tribal employees can enroll in FEHB plans as if they were federal employees.
OPM continues to ask plans to adopt cost-saving coordination with Medicare, a reform that saves money for the program because Medicare usually pays first, which reduces FEHB premiums, and also provides savings to annuitants because their out-of-pocket costs are reduced. Most national plans already has such "wraparound" benefits. Annuitants with both Parts A and B of Medicare now can enroll in an increasing number of plans that provide these savings as well as reimbursing enrollees for part of the cost of the Part B premium. Yes another change is that FEHB plans are now allowed to offer special Medicare Advantage plans to their enrollees as part of their FEHB enrollment. Medicare Advantage is an insurance program modelled after the FEHB program, and now attracts almost one-half of Medicare enrollees. Many FEHB plans now offer this option and provide free or greatly reduced cost sharing as well as reimbursing most or even all of the Part B premium. These changes have greatly changed the calculus for the "to B or not to B" decision upon turning age 65, and now make Medicare Part B enrollment a far better buy than in years past.
Did this answer your question? Thanks for the feedback There was a problem submitting your feedback. Please try again later.