Our Methods and Data Sources

We compare plans in terms of their likely dollar cost to you, including both the “for sure” expense of the premium and the out-of-pocket (OOP) expenses you face for costs the plan does not pay. We estimate OOP expenses using actuarial methods to evaluate the cost-sharing details of each plan for various categories of costs. All FEHB plans cover 80 percent or more of most types of expenses whenever your costs are high and provide a reasonably solid catastrophic limit guarantee. The premium covers not only true insurance for rare, high-cost situations, but also pre-payment of routine expenses. When your medical costs are zero the premium is the only expense, but when your medical costs run into the tens of thousands the catastrophic limit (which in most plans is between $6,000 and $12,000 a year) comes into play. Most of the analysis underlying the Guide is aimed at quantifying, and expressing in terms of annual costs, the various risks you face, and the reimbursement provided by each plan at each level of risk. We calculate costs assuming that you use only preferred providers, or providers who will agree to network fees, both because sensible consumers will avoid leaving the network if they can, and also because there is no realistic way to estimate the many unknown rates that individual providers may charge.

We calculate likely out-of-pocket costs, taking into account the probabilities of families of various sizes and ages incurring relatively low, medium, or high levels of expense (we actually use eight different expense levels, but do not present detailed results for all of these). The low-cost situations are most common but, when weighted for dollar amounts, accounts for a relatively small portion of likely spending. In statistical terms, health care expenses are a highly “skewed” distribution, and the average (or “mean”) is far higher than the typical (or “median”) spending level.
Although most persons do not know whether they will incur large expenses or not—heart attacks, serious accidents, and most other costly scenarios are relatively unpredictable—some persons do have a pretty good idea of some future costs. For example, they may be planning major surgery for a congenital problem. We present data for both groups: persons with and without good information on next year’s expenses and, for those with good prior information, estimated out-of-pocket expenses at several expense levels for each plan. We caution users, however, to beware of attempting to estimate the costs of “known usage” expenses for anything much beyond maintenance drugs. The problem is few are likely to know, and few to have access to, information on such simple questions as the number of visits involved in dealing with a pinched nerve, or with the mix among hospital, surgical, and rehabilitation costs for a condition such as a knee or hip replacement. No one is likely to know if he or she will have a heart attack, a stroke, or a case of Lyme disease next year. Our methods do not force you to make guesses over such matters, or to pretend that the worst will not happen.
Most of the data used in the Guide come from the plan brochures themselves. Plans have several different benefit levels: one for most enrollees when using preferred providers, one for enrollees with Medicare, and one for enrollees when using out-of-plan providers. When analyzed carefully, taking into account the exact wording of benefit descriptions, the brochures tell a clear story. The premiums tell another clear story. However, more is needed to compare the plans usefully and completely.
The estimates of annual expenses we use in the cost tables are based on information taken from a number of sources. The most important of these is the Medical Expenditure Panel Survey (MEPS) of the Agency for Healthcare Research and Quality. This valuable survey produces information for researchers, health plans, and consumer advisors like us on what proportions of the population incur expenses of what kinds and at what dollar levels. We adjust MEPS data slightly to “smooth” the estimates and to cover persons most likely to approximate current FEHB plans’ spending levels. Our cost tables also use rounded estimates to make them easier to read, and the cost headings represent ranges. For example, the entries for expenses of $3,000 represent a range from about $2,000 to $4,500.

Because some plans impose different deductibles and coinsurance for different services, the distribution of costs between hospital and other expenses can significantly affect the amount that a plan will require you to pay for a particular expense total. We model our comparisons closely to average experience. Though few persons or families will have exactly the same cost profile as used in our tables, most situations will be at least close. Our profile, when weighted for probability, corresponds closely to projected expenses of the employed and retired American population as a whole, both in total and in category of expense. Some of the details are shown in the table “Profile of Expenses Used for Cost Tables.”
Our cost comparisons make several other simplifications. First, in analyzing most plans we have to make assumptions about the number of doctor visits and prescriptions to calculate the patient’s share of expenses.
Second, we assume that all bills are for amounts negotiated between plans and preferred providers. Many doctors who are not in the plan network charge more than the plan allows, and all plans do not have the same “profiles” for calculating their maximums. Absent any basis for adjustment, we simply assume what is generally true: all preferred doctors have agreed to limit their charges to plan allowances, and some others will agree to meet that level (or will do so if you tell them what plan you have and explain your cost concerns). There are instances in which some plans’ schedules for some procedures are well below those used by other plans. Unfortunately, there is no way to adjust for this in our tables, though you can protect yourself in the real world by using preferred providers or by getting your provider to promise to stay within your plan’s payment level before getting any expensive service.
Third, we assume that you take advantage of the best cost-sharing rate in each plan. Specifically, we assume that you get network rates by using network providers rather than providers who are not preferred with that plan. For drugs, we assume you use those in the plan formulary.
Fourth, we make assumptions about how many family members incur expenses at each total cost level in a year to calculate deductibles. For example, we assume that in a year with $1,000 in expenses, a family of five will have expenses for three members, and in a year with $130,000 in expenses, for all family members. In the real world, no one’s actual set of yearly expenses will exactly match our assumptions. For plans whose coinsurance rates and deductibles are low or the same for most services, a different mix of expenses would have little or no effect on the cost estimates we present. For other plans, such as those with 100 percent coverage of hospitalization and limited coverage of prescription drugs, a different mix of expenses could change the estimates considerably. However, a different mix would not likely change any cost entry at $3,000 by more than two or three hundred dollars, or any entry for the $30,000 column by more than one or two thousand dollars. (Highly expensive specialty prescription drugs, such as some AIDS, hemophilia, growth hormone, chemotherapy, and osteo-arthritis drugs are the most important potential exceptions.)
We apply our methodology consistently across plans, so that any estimating problem is likely to be small in its effects on the comparative information in the tables 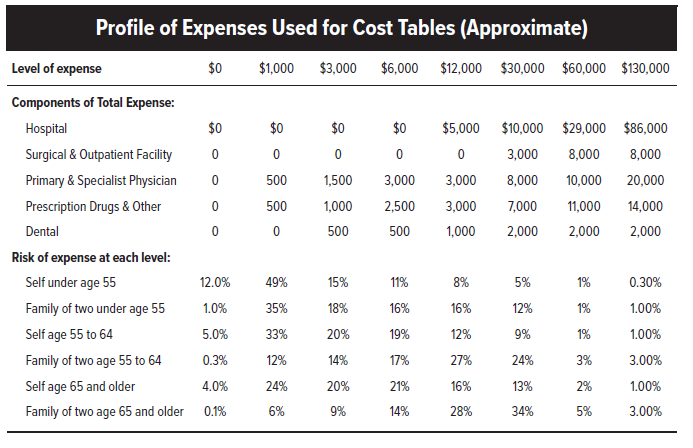